The Argument Over Boarding Up: Giving an Arm and a Leg 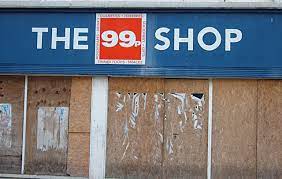 The boarding on the shop window below the home of the NTI newsroom in Tower Hamlets has been adorned with what appears to be a sprayed picture of a rocket emerging from two large bushes. However, this doesn't really affect us, as we are upstairs over what used to be a prosthetic limb shop, 'An Arm & A Leg', which closed down during the Covid pandemic as its main customer base learned to improvise.

The British Retail Consortium (BRC) has calculated that one in seven shopfronts across Britain is empty and yesterday we heard in the Queen's Speech, delivered by the current husband of the future Queen Consort, that buildings left vacant for a year would have to be entered into a "rental auction". A parliamentary bill allowing councils to force owners to rent out shops is part of the Government's levelling-up agenda - a 2019 general election promise that left-behind communities will get a chance to catch up with the rest of the country. The NTI newsroom understand that the 'levelling up agenda' is mainly focused on levelling up the Labour vote with that of the Conservatives, which is proving popular all over the UK.

Before you shoot off and bid for a former men's fashion outlet in Bedford, all of this may be as speculatory as Kier Starmer putting down his beer bottle and getting on with business. Many who know more than we do are calling the idea 'a gimmick'. Do landlords really want to offer rent free leases to avoid boarded up shopfronts? What is in it for them?

The area worst off for closed shops is the north-east, where up to eight betting shops out of nine on one short street are now cenotaphs of gloom, with crushed betting slips laying on the unswept floors of shops, now as empty as the poor souls who once trod their lino.

The Local Data Company, in a survey compiled with the BBC, found that in the first three months of 2022, the overall vacancy rate increased to 14.1%, from 13.7% in the previous quarter. This was 1.9 percentage points higher than in the same point last year, and marks three years of increasing vacancy rates.

This issue is bound up with the ongoing debate about business rates relief and 'rates holidays' which has peppered the columns of journals and websites. It also adds fuel to the 'high street versus online shopping' bonfire.