Back to Work, With a Skip in Their Step and a Small Hole in Their Arms 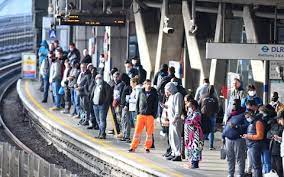 Are times changing? Is the fact that the French and Germans have decided, after all, that our Oxford vaccine is perfectly safe and all of their nonsense was officially made up, making a difference? Is the wallpaper in people's dining rooms / work places so appalling that they have decided it is a stark choice between either re-papering or returning to work? Either way, Pret a Mangers all over the UK are turning on their lights and sniffing their crayfish to check if it will do for today. Working folk are back.

The Office for National Statistics reported that 53 per cent of workers travelled to their place of employment at least once during the week to March 14, up from 48 per cent the week before. This probably has something to do with the kids being back at school, and a lot to do with couples making a late attempt to save their relationships, which are in shreds following the ravishes of Covid. No decent marriage was designed to withstand the ravages of facing each other at the breakfast table, before tripping over something left out in the hall, forced to share a sandwich around 1.00pm and then starting to make dinner together at about 5.30pm, before spending the evening praying for death. We are not barbarians and we all need our fix of casual gossip and (initially) meaningless flirtation.

The Bank of England are, of course, behind the curve and still suggest that 34 per cent of the workforce will continue working one day a week from home. But that is still four days of sitting on trains and ordering fluffy coffee you did perfectly well without for a year. Andrew Bailey, Governor of the Bank of England, said this week: “I would be very surprised if things went back to how they were before Covid. For many people there will be more of a hybrid model of working from home and working in a place of work.” Isn't he supposed to be focusing on a bust economy and making projections that never quite work out?

Britain's employers are divided in opinion between closing down premises and encouraging people to stay clear of the office rather more than they used to, whilst others are welcoming the buzz of meeting rooms and the energy this can create. It is almost impossible to build a culture of a company if people never actually meet each other. Even Andy Haldane, chief economist at the Bank, waded in with an opinion, saying people were having fewer conversations that spur new ideas and that virtual discussions did not build trust and relationships in the same way. “These losses will grow with time,” he said. Odd, isn't it, how much more sense he makes when veering away from economics?