Bank of England Drops the Ball: Sealion Steaks for Tea 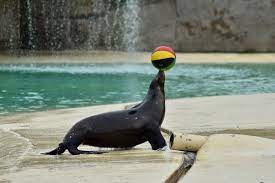 If you were a performing sealion and your only job (not having your looks to fall back on) was to balance a ball on the end of your nose, and you dropped the ball every time:

2   How would you feel about yourself?

Michael Fish of the BBC weather forecasting team provoked nationwide indignation in October 1987 when he predicted that Storm Eunice would be but a mere breeze, and we all then got blown into the next Tuesday clinging to an uprooted tree. The criticism levelled at him was, he just wasn't very good at his job. Well, how about economists and the Bank of England? We learnt today (Wednesday 13 July) that the UK economy returned to growth in May after a contraction in April, "defying all forecasts" and "mystifying economists". Output grew to 0.5 per cent and, whilst all other economists hid behind their desks in shame they sent out poor Paul Dales, who is chief UK economist at Capital Economics, to face the press and say, rather sheepishly, “that the economy is holding up well in the face of high inflation”.

Well, yes Paul; but how are you, the rest of the economists and the Bank of England holding up? Bending down to pick up the dropped ball again, are you?

Apparently there was growth across all major sectors in May, with a special surge reserved for the 'Beggars Belief Sector', which grew by an astonishing 8 per cent (statistics courtesy of analysts who had another eight lying around).

We sent Tracee of the NTI newsroom out to check out who had the busiest May. Health and social work activities grew by 2.1 per cent month-on-month; road hauliers were busy, if a bit sticky, while travel agencies fared well, with business growing by 11 per cent, with pent-up demand for summer holidays (how could economists ever have predicted that?). There was the strongest growth in the manufacturing sector since November 2020 with 1.4 per cent growth.

Meanwhile just across the Pond, US consumer prices rose more than forecast in June, hitting an annual pace of 9.1 per cent, a fresh 40-year high that cements expectations of another historically large 0.75 percentage point Federal Reserve interest rate rise this month.

We asked for a comment from the Bank of England, but were snubbed. They were far too busy predicting snow on Sunday and for Jacob Rees-Mogg to win the Tory leader election by a landslide.