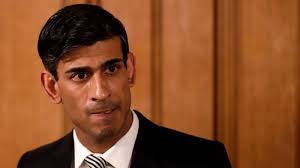 In his address to the Commons this afternoon the NTI newsroom's shoe-in bet for the next James Bond asked one of those questions that only have their equivalent in, 'do you want a smack?' and, 'can I ask you how you feel right now?'

“Do we want to live in a country where the response to every question is what is the Government going to do about it?” an extremely dapper Mr Sunak asked.

"No!" yelled Dhalia from Sunderland.

"Are you having a laugh?" laughed Craig from Daventry.

"Get thee behind me, Beelzebub," warned the White Panther from Broadmoor.

Laudable as some true Blues may find this sentiment the Chancellor did go on to tell us exactly what we can and cannot afford, projecting ourselves over the next 12 months as he took the inflated number available to him and started to divide it between higher spending on public services, help for people on low incomes and tax cuts in targeted areas, including business rates and alcohol duties.

Rishi arrived at the Commons this afternoon armed with new official forecasts, from the same people at the Office for Budgetary Responsibility (OBR) who got them completely wrong at their last guess, showing that Britain had bounced back from the Covid-19 crisis more quickly than expected, with growth of 6.5 per cent this year. These numbers aren't really 'numbers' in the binary way we have come to know them when flashing on our phones or revealing themselves on Euromillions. They are more like guesses based on projections that have never been right in the history of history itself. In any event our Chancellor likes them a lot as they gave him a Budget “windfall” that he divided between higher spending on public services, help for people on low incomes and tax cuts in targeted areas, including business rates and alcohol duties.

He did all this whilst setting out new fiscal rules committing him to balance the books for day-to-day spending by 2024-25 and talking with the Broccolis about how he can magic himself back onto the sliver screen having been obliterated by Royal Navy missiles aimed at Freddie Mercury. It was all a little confusing.

Recognising how unpopular his decision was to end the £20 extra gifted to those claiming Universal Credit during the pan ... blah, blah, blah, he did two thirds of a U-turn by reducing the taper rate (Billy tells us this is the rate at which Universal Credit is withdrawn as earnings rise) from 63 per cent to 55 per cent at a cost of more than £2 billion a year. This seems a little too techy to be a real headline grabber tomorrow morning, but Rishi is a man who will always try.

He tried with the shake-up of business rates which (of course) failed to do what most people wanted him to do with them. Instead the Chancellor gave a one-year holiday for pubs, hotels and other leisure venues, doing his own billing, in saying it is the “biggest cut to business rates in 30 years". (Which, technically, it was.) Alongside this Rishi introduced reforms to business rates, including more frequent revaluations every three years from 2023, relief for those adopting solar panels and a 12-month rate holiday on property improvements.

We heard that in the OBR’s judgment the economy will now settle at two per cent below its pre-pandemic path, rather than the three per cent it forecast in March, implying less long-term pandemic damage. Unemployment will also peak much lower than initial OBR estimates, at 5.2 per cent. We wonder what the real numbers will turn out as, and if the Office will get within 20 per cent?