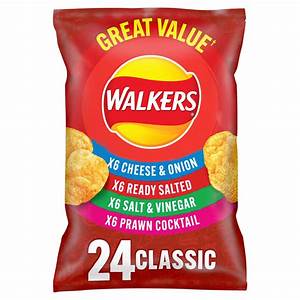 What is it that truly divides this great nation of ours? Unionist or nationalist? Red or blue? Royalist or Meghanophile? Strictly or anything else? Surely it must be cheese and onion or salt 'n vinegar? The fact is that recently it has been any fried and high-calorie potato snack you can get your hands on, so empty have been our shelves of said items. But do we have to resort to Cheesy Wotsits, very often just a pet-name for one of the occupants of the households of the UK?

We understand this may be a first world problem, but when you have 'people coming round' and you can't get a multipack for love nor money it becomes as real as the queue of container ships shuffling to get into Felixstowe docks. The Office of National Statistics (ONS) are all over this; they closely monitored supplies of crisps between 19 and 22 November which raises an important national question. What on God's Earth are they doing? In any event, as a result of their visits to local shops and Tesco in Runcorn they noted that multipack crisps ranked the lowest in availability, with 29 per cent of stores recorded as either having “none” or “low”.

Forget your paracetamol, ibuprofen, sparkling water and frozen turkeys (the next most elusive items on the ONS's 'love nor money list'), crisps were the hardest to get hold of in 270 shop visits. According to the ONS, the weighting for crisps within its basket of goods has risen this year to 3.12 from 2.64 last year. No-one knows what this means but it sounds important and has increased Richard's longing for a packet of cheese and onion.

It is stories such as this that can start a run on everyday goods and, true to form, the CBI have announced the possibility of gift shortages over Christmas, sparking the strongest monthly rise in retail sales in November since May 1990. In Gateshead there is hand-to-hand combat over Missoma Mini Pyramid Charm Hoop earrings and the Grufallo Game, whereas a woman was taken out at the knees outside an Argos in Truro when she claimed the last Folio Society Tales of Beatrix Potter books and crazily turned to offer the finger to her fellow shoppers who started to bay for her blood.

Those masters of treachery at the CBI, who started all this, questioned 125 companies including 51 retailers, finding that year-on-year retail sales growth accelerated this month, while internet sales fell for the first time since the survey asked that question in 2001. Chief protagonist at the CBI, Ben Jones, said that reports of supply chain disruptions appeared to have prompted consumers to start their Christmas shopping early, while efforts by retailers to keep their shelves full seemed to be paying off, with stock levels regarded as adequate for the first time in seven months. But no crisps.

It's a war zone out there; the world has gone mad for pigs in blankets, prawn cocktail crisps and the Lexon Mino+ speaker. Only a new Covid variant can save us now. Oh, what's that? ...