Cunning Plans For A Sunday ... And Philip Green (Sorry, Are You Eating?) 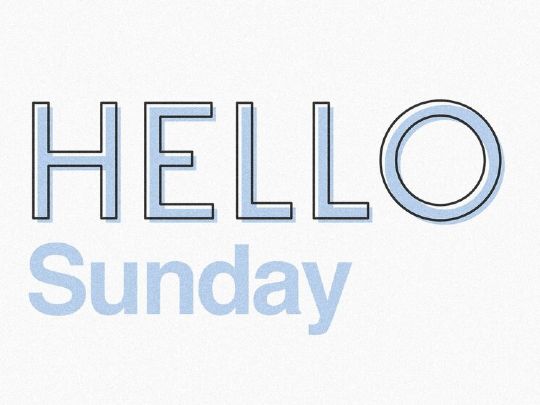 Captain Blackadder once said: “Am I jumping the gun, Baldrick, or are the words 'I have a cunning plan' marching with ill-deserved confidence in the direction of this conversation?", provoking the Baldrick retort: "I’ve got a plan so cunning you could put a tail on it and call it a weasel". It is plans of this degree of cunning we need to come to the rescue of high streets designed by those only artful enough to miss a belt loop on their trousers.

"Empty shop premises? Let's stick a pizza restaurant in there."

"But there's one next door and three doors down."

"Ah, yes, but we put cheese on ours and serve salad."

There's some pretty wily thinking reported in today's papers (Sunday 13 September). Boohoo, the online fashion retailer, which has recently inspired whistleblowers to peep in the direction of the processes and conditions at their factories, raising questions about minimum wage violations, are checking out New Look as the struggling high-street chain teeters on the brink. New Look has shown a recent addiction to CVAs, entering as it has its second in three years, and we in the NTI newsroom reported last week that it is ironing its own mustard floral puff sleeve midi-dress to face a crunch vote of creditors, which is set to take place on Tuesday. It is said that Boohoo, like one of a venue of vultures, would buy the New Look brand and ditch its stores (as in buying the ingredients for Christmas lunch and then ditching the turkey, stuffing and chipolatas) and has form in exploiting the high-street turmoil in recent months by snapping up brands such as Karen Millen, Oasis and Warehouse, after they collapsed.

Boohoo has a market valuation of £3.8 billion and, when asked about the rumours, it merely squawked, turning its malignant red-rimmed brown eye away, it would “review opportunities as they arise”.

Meanwhile, Sir Roger De Haan, the son of Saga's founder, is cooking up a plan to drill into previously un-mined potential at the company of the silver fox. His plan is to ignore all those youthful, bouncy 50 year olds and return to its grey roots. Investors, who will be asked to stump up a further £50 million, are desperate for a shot of positive news and sat up with a nice cup of tea and a biscuit to hear him talk of reconnecting with the company's core customers, those in their 60s and 70s. Saga plans to shift its attention to retired customers, relaunching extended holidays of up to three months to long-haul destinations such as Thailand when travel rules allow. Other initiatives will include cultural city breaks and a good sit down after a morning of walking up to the Post Office.

But whilst the De Haan recapitalisation offer has been put to shareholders, who will vote on October 2, it is not the only one on the table. A rival approach from two private equity firms, spearheaded by Mark Wilson, the former chief executive of Aviva, was rejected by Saga’s board, which believed the 33p-a-share offer undervalued the company, despite the premium. Others are circling.

That silver-haired stoat, Sir Philip Green (who hasn't seen his size six Gucci loafers over his belly for 40 years), has been out-witted by his own cunning and his Arcadia fashion group has performed a U-turn, agreeing to pay full salaries for head office staff facing redundancy. A spokesperson said: “We are extremely sorry we were caught trying to rob all those individuals and for all the distress we have caused, and apologise unreservedly. If we had known we might be caught we would probably have nicked money out of their pensions instead and sacked them for something we would have made up on the spot. No, really, sorry."