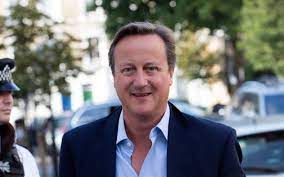 It is so easy to be misunderstood if you are a former premier, rather wealthy and have the judgment of a Nigerian courtroom. Poor David Cameron has suffered the mortification of his daily lecture and appearance rate decreasing from £120,000 an hour (in 2016, when people had still heard of him) to a car-park space and a pudding, after his entanglement with those nasty people from Greensill.

We all now know that our Dave earned more than $1 million a year for his advisory work with the disgraced bank and he has been the subject of a number of rather tough questions about his lobbying and its alleged intentions. He must have gained some relief from the report of the Treasury Select Committee yesterday (Monday 19 July) which basically told us that although Mr Cameron's intense lobbying on behalf of Greensil demonstrated "a significant lack of judgment" (Dave, Dave, Dave, oh Dave), he didn't actually break any rules (as such). But this is becauser the rules are so rubbish they are harder to break than the hearts of England fans across the length and breadth of our fine, hot country.

This has apparently resulted in a "strong case for fortifying the rules". We'll say; if a house is broken into five times in two weeks there would be an equally strong case for closing the door of the property when you pop out to the pub.

The cross part committee don't seem to like our Dave too much, suggesting that he was not 'lobbying on behalf of small and medium-sized businesses' as he had claimed (which would have been a worthy and decent thing to do). Rather, he had entered into what they said was more of a sales pitch on behalf of his paymasters (which is less worthy and really rather selfish and greedy).

We're not even sure people would vote for him any more ...