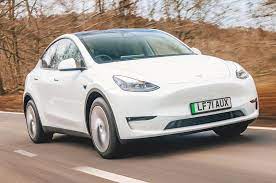 Elon Musk takes a good photo, doesn't he? It is often said that a person starts to look like their dog; well, Elon Musk appears to look more and more like the front end of one of his beloved Tesla Model Ys. Running the world's fastest growing company, it could be the strain is beginning to tell on the face of the South African-born billionaire, as it is on the faces of some of his employees who, according to reports on the BBC, have complained they face "nightmarish" conditions of rampant sexual harassment at Tesla's Fremont factory in California. We should say that this is according a lawsuit brought by a female employee. Jessica Barraza, who worked night shifts at the factory, said she experienced "near daily" catcalls and inappropriate touching. We in the NTI newsroom are not completely sure what having an "onion booty" or "Coke bottle", means, but some of poor Jessica's male colleagues accuse her as having one.

We small businesses, operating in the United Kingdom, have different problems as we are working below capacity as high fuel costs, staff absences and supply disruptions bite, according to a survey of private sector firms. The Federation of Small Businesses’s ('FSB') quarterly poll of companies found that 55 per cent of the 1,200 surveyed said they were not running at full tilt between March and April. That is certainly the case with our own Billy, who may not have an onion booty, but he did have a cheese and onion pie for lunch last week and he hasn't been the same since. He scrunched up his face in agony for hours after in an expression some of his more unkind colleagues called "doing an Elon".

The FSB have come straight out with it, calling what us small businesses are experiencing a “cost-of-business crisis”. A record 87 per cent of us small business owners said operating costs have risen compared with the same period last year. Spiralling costs and workplace absences lead the way, as the causes for this crisis are investigated, followed swiftly by higher energy costs and supply chain disruptions.

Rather bizarrely, our overall measure of business confidence rose in the first quarter of this year compared with the end of 2021, the metric standing at 15.3 points, down 12 percentage points from this time last year. What this metric means, bugger only knows; it seems a bit to us like saying we are three bananas across and a shrubbery down, compared with a turtle neck and a traffic jam this time in 2021; but if it is said to be positive, we'll take it.

Meanwhile job vacancies continue to grow, rising by a fifth compared with pre-pandemic levels, but it seems the bulk of new jobs are in lower-paid and lower-skilled sectors, reflecting the shift towards online shopping since 2020. Last month the unemployment rate fell to its pre-pandemic level of 3.9 per cent and there are concerns that high demand for workers and rising consumer prices will lead to higher wages that will further entrench inflation in the economy.

The Bank of England weighed in with their view, when they should surely have been concentrating on inflation running at more than five percentage points higher than their target. The Bank has said that several factors, including a fall in migration from the European Union and more people dropping out of the labour market, may have helped to create a smaller total workforce in recent years. It's this type of eagle-eyed observation that makes them worth their salaries for doing just a small part of their job.