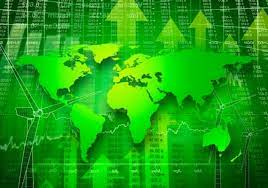 The United States always got things earlier than the UK and mainland Europe. They enjoyed Hurricane Donald some two weeks before we did, endured Suits actors and had many more addicted to crystal meth than the UK months before it hit our shores. So, it may be a good sign that Wall Street indices hit record highs at the end of last week, after a sharp rise in retail sales formed a solid foundation for the kind of recovery that will encourage the rest of the western world.

The Dow Jones Industrial Average closed 0.9 per cent up on Thursday evening, breaking through the 34,000 level and having risen 11.2 per cent since January. That is quite a bit more than the average British saver can make at, say, the Nationwide where the annual interest rates are 0.05% gross a year (variable) if an account holder makes more than one withdrawal in an account year. Now to work on that time machine and the only slightly simpler task of acquiring US citizenship.

The S&P 500 ended up 45.76 points, or 1.1 per cent higher, on Thursday evening which, at 4,170.42, is its 22nd record close of 2021. It is also 11 per cent higher than the levels seen at the end of 2020. On Friday (16 April) America's retail sales figures for March rose by 9.8 per cent, sure some of it reflecting the arrival in US homes of President Biden's $1,400 stimulus cheques. There was also a reported 13.4 per cent rise and food service and drinking places compared with February, with 200 million Americans being vaccinated against Covid-19 in the first 100 days of the new presidency.

Is this all a sign of things to come? Meanwhile over in China the economy grew by a record 18.3 per cent in the first quarter compared with a year earlier when the country first went into lockdown. The growth was the strongest since quarterly records began in 1992 and had been led by a recovery in exports and a rise in domestic consumption. It's true that these numbers were flattered by comparison with the first quarter of 2020 when the Chinese economy contracted by 6.8 per cent, but they are still mightily impressive.

Back in Great Britain the Office for National Statistics will say, in its latest labour market report, that unemployment edged up only slightly to 5.1 per cent in the three months to February. The world is normalising, vaccine rollouts are firmly underway, Neil had a curry in the garden outside his favourite local Indian-themed pub last night and the sun is out.