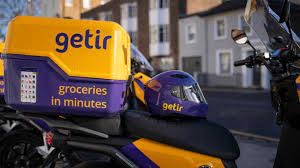 Billy was trying something this morning in the NTI newsroom. He thought of a grocery item and then clicked his fingers, testing to see if the item arrived at our door before the sound of the click reached his ears. It didn't, but it was a close run thing.

For those of you who think that Gopuff, Weezy, Getir, Dija and Zapp are five of the firemen in Camberwick Green you are mistaken. They are the names of rapid grocery delivery companies which are springing up all over the conurbations of the United Kingdom, more often than not printed on the backs of rucksacks of scooter riders. In many ways they are the fruit of the pandemic, with some people reluctant to leave their homes to visit a local store for fear of being taken away at the knees by a rampaging virus, or Laura Kuenssberg intent on talking endlessly about it on the Ten O'Clock News. The alternative is having the item delivered to your door. Genius.

Berenberg are a broker whose employees, we think, have never had the urge to order a kilo of Haribo and a Creme Egg at one o'clock in the morning, but they reckon the market for online rapid delivery of convenience groceries could be worth £4.4 billion by 2025. This has stoked the interest of many an investment company, looking for a receptacle for all the funds they have awashing their coffers.

Analysts are warning the established grocery giants, some of whom themselves are attracting takeover offers, if not takeaway, interest, from some of the same investors. "If UK grocers do nothing, their sales will be cannibalised”, the analysts said. “Independent convenience store operators would likely lose out the most, but we think Marks & Spencer, Tesco and Sainsbury’s would face the greatest cannibalisation risk in our coverage”. Cannibalisation is an interesting term in this context, but we are certain its usage was deliberate, as it puns on the consumption of foodstuffs and piques the interest.

The supermarket establishment is being challenged by companies like Getir, which is based in Istanbul, and which raised $550 million in fresh capital in June to expand in the American market. The company’s staff pick branded groceries from “dark stores” around London and deliver them on electric scooters within ten minutes. Even Billy, who has a penchant for anything dark, had to look this term up. Apparently a "dark store" is a large retail facility that resembles a conventional supermarket or other store but is not open to the public, housing goods used to fulfil orders placed online.

Apparently, people such as you and us are willing to spend about 20 per cent more for groceries delivered rapidly than they would pay in convenience stores. Rapid delivery platforms, where consumers are impulse-buying, also give retailers the opportunity to link-sell incremental items, offering additional revenue streams from bigger basket sizes and supplier advertising. So, why don't the big boys set up their own versions of these delivery services? Remember how behind the times Topshop and Debenhams were on the matter of online fashion. Cummon, chaps - get your act together and order in a pack of biscuits to munch on whilst you're cogitating.