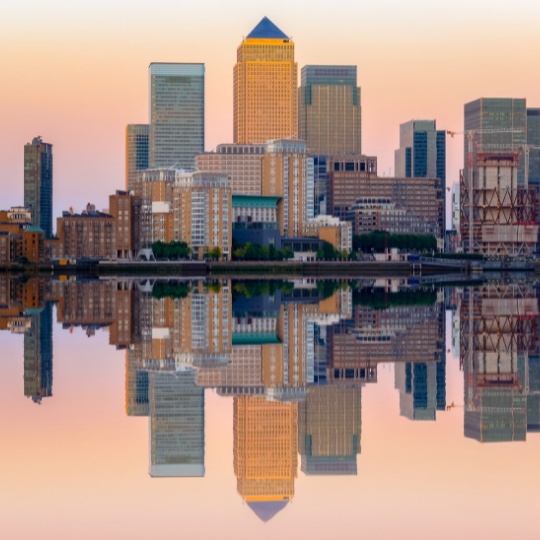 As Mr Johnson and M Macron were bumping elbows in Cornwall this week and the body language experts on Sky News were telling us that what our Boris really wanted to do was mount a horse and invade Calais, some of us were wondering:

1   What the G7 will do to rebuild our planet after its most recent financial and psychological demolition?

2   What it will take to explain to the French that Northern Island is part of our country, in the same way as over-fat geese and bad brown shoes are part of France?

Surely one way to meet the gargantuan challenges of the future will be to unleash the enterprise that enabled the Canary Wharf district of London and, in the interests of détente, La Défense in Paris, to grow from wasteland and redefine huge areas of two ‘world cities’.

Canary Wharf celebrates its 40th anniversary this week. What do you buy an area of East London, prophetically named ‘the Isle of Dogs’, for its ruby celebration? A curry in one of its 25 Indian restaurants?

In 1981 Michael Heseltine set up up the Docklands Development Corporation. The shrinking UK capital was haemorrhaging jobs and people and, at 6.7 million, London’s population was the lowest it had been since before the first world war, two million fewer than at its peak.

Thatcher’s Government knew that radical change was needed, as it is needed now, and ten years later construction began on the Canary Wharf site, with the jewel in the crown, the pyramid-crowned skyscraper, Canada Tower, rising like a swan out of a sewerage ditch. The cost of this initial phase was a staggeringly low £77 million (the cost in 2021 of the penthouse and the top seven floors of No 1 Park Drive, one of the newest signature developments on the estate).

At a vulnerable time in its short life the project didn’t need the first of three ‘once-in-a-lifetime’ global calamities in 32 years, and the group was placed into Administration due to Olympia & York initiating proceedings. What to do with a bejewelled watch in the middle of a moonless desert?

Canadian entrepreneur and property tycoon Paul Reichmann pulled together a consortium of wealthy investors (including Saudi Arabia's Prince Al-Waleed bin Talal and the American media mogul Larry Tisch) to buy Canary Wharf back from the banks for £800 million, a bit of a bargain for what was to become 97 acres of prime London real estate.

Canary Wharf has become a symbol for both inequality and possibility. From the windows of many of its glittering glass towers flashing blue lights can be seen shuddering to a halt outside public housing, unemployed men being dragged into the gaping mouths of black Maria vans. The towers have had their dark moments in the past 40 years, but nothing compared with the pitiful poverty of some of the most deprived areas of East London that stands on pot-holed pavements and gawp at them.

For some the growing development, which shows no sign of slowing, provides employment, even opportunity. For others, sunlight refracting off the acres of glass causes them to curse the lives of those in limos being rushed to dinner in London’s West End.

Michael Heseltine recently said: “If I had made a speech then about what we were planning to do about London’s Docklands, predicting everything that has happened there - Canary Wharf, the Dome, the Exhibition Centre, the Olympics, the high-speed rail link, London City airport - they would have sent the men in white coats and had me locked up.”

Then again he was regarded as being fairly bonkers when he fallaciously hoped to arrange a European merger for Westland Helicopters, to bolster the UK’s defence industry, but his boss favoured an American buyer. This resulted in one of the most entertaining spats in English political history.

Entrepreneurs and visionaries often need a pin-prick of light at the end of a dark tunnel to drive them on. At 40 years old Canary Wharf may provide that inspiration. The world needs this now, just as G7 are calling for more equal and ‘feminine’ values.