Hedge Funds Dancing on the Grave of Debenhams 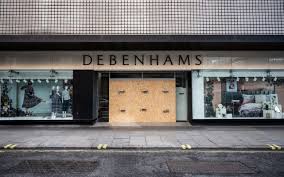 Billy has just returned from a short trip to Dubai. Aarati thinks she heard him say he was doing something concerning 'traffic' over there, but cannot be absolutely sure. Whatever he was doing in the Middle East he returned astonished, having seen a Debenhams in one of the many jewelled malls adorning its capatalistic crown, shining in all its glory. Was this an apparition? Is the former retail giant grave-walking amidst the desert sand?

Whatever the altered reality of the Middle East, FRP Advisory can confirm that there are dodos less dead than the former retail monolith on these shores. FRP’s latest report to Debenhams’ creditors said total distributions were £304 million as of the 8th of last month. The NTI newsroom have been doing some light maths and it seems that the monies recouped from the implosion of Debenhams include a net £142 million from running down its inventories, plus £55 million paid by online fashion retailer Boohoo for the chain’s website and brands, and other asset sales. By far the biggest of these was the £120 million sale of Magasin du Nord, Debenhams’ upmarket Danish subsidiary, to privately owned German group Peek & Cloppenburg.

Moving to the other side of the balance sheet, Debenhams was carrying about £720 million of debt when FRP was appointed, including a £200 million facility provided by the hedge funds, including Silver Point Capital, Alcentra and GoldenTree. It is as certain as a fallen and mud-spattered second prince that the hedge funds injected finance into the situation to make money. However, although they have made little to none, they have probably lost a lot less than they might have feared when the pandemic began. The funds acquired chunks of its revolving credit facility and bonds at a discount from banks and other investors as its financial condition deteriorated (because that's what they do, the same as magpies pecking at carrion on the road or Sir Keir taking lumps out of a wounded Boris at PMQs).

The reality is that unsecured creditors, such as landlords, local authorities and suppliers, are unlikely to receive anything from the death of the high street icon and we are pretty sure they have all come to terms with this now (and hope they didn't lick their wounds by investing in the mystery of crypto-currencies, which lost about seven trillion dollars off their face value last night when Soz from Maidenhead pushed the wrong button on his PlayStation 5 whilst playing Vanguard, triggering the run).

UK Border officials have just arrived at the office in Tower Hamlets to chat to Billy. We think they might have found his lost hand luggage and have popped round to return it. More later.