How Filthy is the Money Washing Around London's Laundromat? 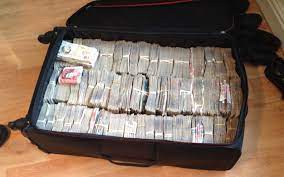 The Economic Crime (Transparency and Enforcement) Act 2022 was introduced in the House of Commons on 1 March 2022. It was rushed through the various halls of Parliament by big men with gold teeth and non-focusing eyes, and Royal Assent was announced shortly after midnight on 14 March. How far will the new Act go to lock the door on the London laundromat, where dirty money comes to party, infecting our economy and even our political system? It has been a long time coming.

Blair's New Labour was hell bent on a mission to deregulate Britain, making Britannia cool and rich and followed on from Thatcher's general opening of the markets. Our current PM, the hardly mentioned Boris Johnson, openly talked about making London a hub for Russian money. Our foreign-owned press were encouraged to downgrade the word 'kleptocrat', preferring the hardly better and improperly used 'oligarch' to define those who came to our shores and pushed our moral compass south. Mind you, we hardly needed encouragement as, at the tail-end of our own dirty little Empire, sunny places such as the Caymans and British Virgin Isles were welcoming money without finger prints or clear ownership, so we can hardly blame those from around the world to visit us not for our climate.

The Labour Government made things worse in 2008 by introducing the 'Golden Visa Scheme'; offering fast-track residency in the UK for wealthy people outside the EU to invest in the our country, bringing Louis Vuitton bags of dirty cash with them. They could set up companies called absolutely anything for just £12, being advised by hungry lawyers that there was no statutory power to check ownership and being encouraged to create a shell company within other shell companies as a new form of Russian doll.

Golden Visas were scrapped by the Tories this February, but not before holders of them applied for permanent residency in the UK, at a speed depending on how much they invested. A £2 million investment allowed an application for residency within five years, shortened to three years with £5 million, or just two years if £10 million was invested. Until Putin started on his 'special operation' a couple of months ago, they were here to stay ... legally.

Once the property was in our country it was sprayed around on assets such as property, yachts, companies; offshore shell companies creating an opaque ownership structure. It is estimated (and the number is probably just a fraction of the truth) that £6.7 billion of land has been bought with such "suspicious wealth".

The issue is that Britain does not have clear, well-enforced anti-money laundering rules and our financial conduct and regulatory agencies are far outgunned by those who flaunt what rules there are. The Serious Fraud Office has an annual budget of just £50 million, or 'a good lunch' for a kelptocrat who, until recently, hid layers of deceit behind blackened car windows.

But things are changing. The Economic Crime Act states that those owning property must tell the Land Registry who they are, making it much harder to disguise true ownership. Part 1 of the Act (sections 1 to 44, and Schedules 1 to 5) establishes a public register of beneficial owners of non-UK entities that own or buy land in the UK, operated by the Companies House registrar. Beneficial owners are those who ultimately own or control an asset. Failure to register (or submitting false information) is a criminal offence and also prevents the entity from being able to buy or sell (or mortgage) UK property in future.

... the truth can now be investigated.

When applying to the court for a UWO, the relevant enforcement authority might apply at the same time for an interim freezing order which would prohibit the person receiving the UWO from selling it. The Act allowed for the court to grant an additional 126 days to enforcement authorities to review (and take action on) material provided in response to a UWO, before the interim freezing order expires.

If there are any oligarchy-type kleptocrats still out there, we may not know exactly who you are - but we will soon.