How Sorry Can We Feel for the Cadogan Estate? 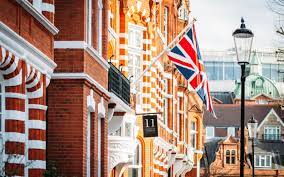 The Cadogan Estate is one of the UK's best and most exclusive addresses. It is 93 acres of luxury market-led apartments, houses and commercial office occupiers in the heart of Chelsea, London. According to Tracee of the NTI newsroom, the previous holder of the title 'Best Address in the UK' was held by Forest Road in Blackburn, when her ex (Titan) lived there, before police moved him and his three mates on, claiming their camper van was illegally parked.

Cadogan Estates Limited are British property investment and management companies that are owned by the Cadogan family, one of the richest families in the United Kingdom, which also holds the titles of Earl Cadogan and Viscount Chelsea, the latter used as a courtesy title by the earl's eldest son. Tracee is quick to point out that Titan also had a 'courtesy title' for a while, being known by those looking after him as 'Man No. Three' in the line-up. The Cadogan family has seen the value of its portfolio fall by almost £800 million in the year since May 2020 and no-one with shares in the business will have a sniff of a dividend any time soon. That is a significant loss, and the chances of Tristram extending his Grand Tour of Europe into a third year are now much less.

However, there is reason to be positive for this particular residential and commercial landlord. Hugh Seaborn, chief executive of the group and a person who, you just know, would never dream of wearing socks with loafers, reported today (Thursday 1 July) “Bunting is up, there are lots of chairs and tables and umbrellas out, restaurants are full, people are out shopping and there’s a lot more positivity around.” For those of you reading this article who are from Blackburn environs, 'bunting' is small strips of coloured cloth hung from string by southern people to celebrate events and notable occasions. That's correct, Banjo from Burnley, much like cans of Fosters being lined up on the wall of the ginnel.

Fashion brands including Ralph Lauren, Ganni, Anabela Chan and Off-White (or 'who?', 'who?', 'what?', 'who?' and WHY?' for some of you) all agreed to take units in Chelsea last year. Beaverbrook, the country house hotel specialist, has agreed to open a “luxury townhouse retreat” on the estate. Yes, like a bed and breakfast, but minus a pool table and plus Ionic columns.

Retail property accounts for about a third of the Estate's portfolio and Mr Seaborn (sporting a linen blazer and monogramed shirt cuffs) expressed his concern that the UK is the only European country not to offer tax-free shopping, and this will inevitably result in some visitor spending going elsewhere. People in Blackburn have similar concerns; theirs are based around tax free cash payments to Pete the plumber which, if they are not made available, may result in the two Kosovan brothers who live in Accrington cleaning up.