If We Are to Let the Numbers Decide, We're Doomed 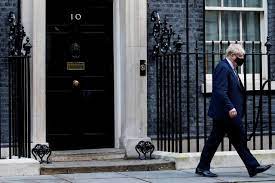 2022 has pretty much been a year of precarious numbers to date and this week has delivered nothing the first two weeks would be ashamed of.

Tomorrow (19 January) sees the release of inflation numbers for the last month of last year and all bets are for UK inflation to rise to a 30-year high; because if you squeeze something from all sides everything will finally give (just ask Tracee's new fad, Dr Pimplepopper, who can do things with spots and cysts that only Boris can match with parties at No 10 - another number that cannot lie. Or can it?).

Economists polled by Reuters forecast inflation to hit 5.2 per cent, the joint highest since the early 1990s and up from a decade-high of 5.1 per cent in November. They attribute the upward price pressure to higher energy costs, strong demand for most goods and services, continued supply chain disruption and pretty much everything going to hell in a handcart.

The Bank of England's Monetary Policy Committee will meet, with a slightly more expensive cup of tea and a bit more costly packet of buscuits, on February 3 to decide whether to follow December's rate rise of 0.25 per cent with another. We wonder if they are acquainted with the phrase 'shoe-in'?

But inflation isn't finished there. It is widely expected to rise to almost 7 per cent in April when Ofgem, the energy regulator, will increase its default energy tariff price cap. Besides all the upward news on the price of energy, core annual inflation, which excludes energy, food and alcoholic drinks, jumped to 4 per cent in November, the highest in nearly 30 years; so it is just more expensive to live at the moment.

All of which makes it a little surprising that average earnings are now falling in real terms, with inflation outpacing pay gains. The ONS are usually spot on with such things and they say the measure of growth in average weekly earnings, excluding bonuses, was 3.8 per cent for the three months to November, leaving earnings flat in real terms over the same period, and down 1 per cent in November alone. This is with unemployment falling to 4.1 per cent in the three months to November, 0.1 percentage points above its pre-pandemic rate.

Employers will probably catch up eventually and twig there is a connection between those two sets of numbers. They are generally struggling to recruit at the moment, the number of vacancies rising to a record of 1,247,000 in the three months to December, equivalent to four in every 100 employee jobs in the economy, with a quarter of a million posts unfilled in health and social care alone.

So, the the numbers are all over the place ... but we are still fascinated by only one at the moment. No 10 ...