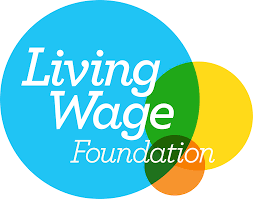 If you are working for the same employer on 31 March and 1 April 2022 you can expect what Rishi Sunak considers to be a 'hefty increase' overnight, as your minimum wage hourly rate will increase from £8.91 to £9.50 an hour. This is not to be sniffed at. At JD Wetherspoon you can still buy a pint of Greene King IPA or a bottle of San Miguel for 99p, which means you will only have to add another 40 pence to your additional hour's wage from April of next year and the remaining £8.51 can go on rent and food and stuff. Michelle is already insisting that Neil passes on these increases in April and he is in a right grump about it.

The Living Wage Foundation is (shockingly) going even further. It states that the UK wage rate should be higher (than £9.50 per hour) and should be paid by businesses who believe their staff deserve a wage which meets everyday needs - like the weekly shop, or a surprise trip to the dentist, or Alton Towers (where they can stand outside and watch the very top parts of rollercoasters as they whirl much wealthier or more thrifty people around the skies of Staffordshire). The Foundation believes that a 'living wage' is as much as £9.90 an hour in most of the UK, raising to £11.05 in London. These numbers are based on a basket of household goods and services, excluding three Eurmillions tickets, vape liquids and that nice Desperado beer with tequilla.

The living wage is voluntarily paid by almost 9,000 UK businesses, including half of the FTSE 100 and big household names including Nationwide, Google and Brewdog, as well as Everton and Chelsea football clubs. (The NTI newsroom want to point out that Romelu Lukaku earns around £325,000 a week at Chelsea, which puts him in the higher bracket as, assuming he works around 15 to 18 hours a week, his 'living wage' is approximately £18,055 per hour. Chelsea are all over this 'equality of wage' message.)

All of this means that those being recruited can now make greater demands of future employers, sometimes being so bold as to demand sick pay and soap in the gents. Gousto, the recipe kit company who supply cheery looking red boxes full of ingredients to make into proper food, are insisting their suppliers pay 'a living wage' and are hiring fast. They aim to double staff headcount at their London head office, Lincolnshire factories and distribution centre in Warrington, from 1,000 to 2,000, in the next year and this is just one example of 'salary inflation' which we are experiencing all over the UK.

Official data show that more employers are opting to pay low-wage workers better than they are required to by law. Figures released by the Office for National Statistics continue to show a concentration of workers paid within 20p of the statutory minimum but a new peak is also now visible around the £10 mark, reflecting higher uptake of the real living wage. This is part of a wider strategy to educate employers that their staff are living beings who deserve to increase the odds of, well ... living, which comes as a painful reality to some. Mind you, many UK executives should start listening to themselves, as in a recent survey by Ipsos Mori four in five bosses said both the economy and their own businesses would improve in the next 12 months as the UK recovered from damage inflicted by the pan ... blah, blah, blah. The proportion saying that the general economic condition of the country would improve rose higher than pre-Brexit levels for the first time since the 2016 referendum.

A note of caution should be sounded, though, as many of these top executives are actually Conservative MPs who are taking second jobs at FTSE companies in order to increase their own living wage and just 'getting by'. Do you know how much it costs to dredge a moat?