Message From the Management at Evans Cycles: On Your Bikes 300 Staff 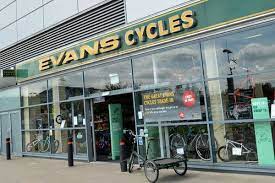 Mike Ashley's Frasers Group pledged to stop using zero-hour contracts among its many retail staff in 2016, after union representatives managed to squeeze into a room with the cormorant chairman by holding their breath and not looking directly at him, persuading the company to halt their use.

The result is typical of Ashley, as today (Wednesday 10 March) the company sent two types of note to the 475 store staff of Evans Cycles; the first note told 300 staff that their jobs no longer existed, halving its workforce in many of its 55 stores. The other cheerily told management they would have to work longer and harder, whilst all other store staff would be switched from fixed-hours to zero-hours contracts.

"Watch your lunch, he'll be at it," whispered another, afraid he'd be heard.

"Make that 301," said Ashley, as he glared at this conspirator, two sausage rolls hanging out of his mouth.

The Frasers Group bought Evans Cycles out of Administration in 2018 and, despite demand for more cycles and odd cycling accessories mainly based around an incomprehensible love of lycra by cyclists, trading conditions have apparently been hard for the store chain during the Coro ... blah, blah, blah. The second of the two notes sent to staff said; "We cannot rely on old ways of running our business and we must adapt."

"You mean 'old ways' such as paying people properly and respecting their employment contracts?"

"Absolutely; all that is going to stop. And no telling the press that there are 'very difficult working conditions at the store'."

"Well, there are Mr Ashley," said one of the members of staff who had received 'Note 2: Zero-Hours'.