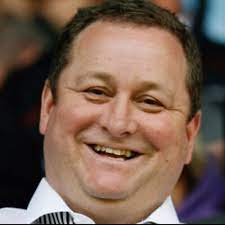 With Neil in the Orkneys (something to do with the 'witness protection porgramme') and Billy helping the Metropolitan Police with their enquiries into the Manchester Premiership football player who is, it is alleged today, working with th authorities in relation to 'child sex offences' we are down to the cleaner and Aarati's nephew Larent (an apprentice who needs to look into the meaning of 'quarantine') to work the news desk. Therefore, it is of no huge surprise that the huge surprise that is Mike Ashley is coming to the newsroom's rescue.

It is reported today (Tuesday 20 July) that the big man with more money than sense (we calculate this means he has about £1.70 to his name) is applying to the High Court to set aside a settlement agreed with Debenhams’ Administrators earlier this year.

"Er, we are not able to do this under the terms we signed this year with FRP Advisory," one of his close aides was heard to whisper to large Mike.

"You're fired," came the response.

"I have sausage rolls, Mr Ashley."

The Sunday Times reckons this action is designed to kickstart investigations into Debenhams group’s directors and advisors, but we are not so sure. It sounds to us that someone likes the limelight almost as much as he likes a ham sandwich. Those in the know consider that the deal he struck with FRP was part of a negotiation in which Ashley and his henchmen could take fixtures and fittings from closed Debenhams' stores, which are otherwise gathering dust. However, the enormous man is still furious about the first time Debenhams filed for Administration, back in 2019, which resulted in his near 30 per cent holding being wiped out.

The 'what happens next?' is more interesting than the 'what has happened so far?' and we skeleton staff barely filling a corner of the NTI newsroom will be back to you more as it lands on Larent's desk (which he put up for sale on Ebay this morning).