Mike Ashley: When Does Stalking Become a 'Thing'? 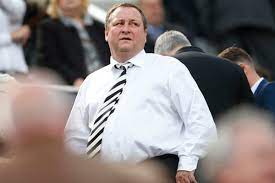 Neil is nursing his new electric car somewhere north of Greenland and, having previously admitted that all he knows about it is how to turn it on he has been thwarted by this one function going wrong and has told us from a telephone kiosk that he can't even do this.

This presents the rest of us in the NTI newsroom with a dilemma. There is a story on the newswaves about Mike Ashley this morning (Friday 5 August), which Tracee thinks amounts to nothing less than us stalking him. Well, she actually called it "faceterbating", which we assume is the same as stalking, and when asked to clarify she said:

"You know, 'adam lamberting'," and when we responded only with blank looks she simply said:

So, should we report the story, given that it has nothing to do with insolvency or restructuring? You be the judge. That great (as in 'huge') old friend of the newsroom, Mike Ashley, is apparently preparing to step down as chief executive of Frasers. Everyone who has followed his adventures on this site knows that the famously fickle retailer could change his plans at any given moment, however. For now,Mike is planning to pass the baton to Michael Murray, who is engaged to his daughter Anna and serves as Frasers’ “head of elevation”.

Firstly, can you imagine the buffet at that wedding?

Secondly, what on God's planet is a 'head of elevation'?

Thirdly, who would marry into that family?

Mind you, Michael Junior must be doing something right, as Frasers' shares are at their highest level since 2015 and investors are predicting a strong pandemic performance, when it is announced next week.

What could have persuaded Mr Murray to accept the role, given that he has only earned £10 million from Sports Direct in recent years via his consultancy vehicle MM Prop Consultancy, making him better paid than most FTSE 100 chief executives?

When asked why Mike Ashley was stepping down, Michael Junior said his future father-in-law didn’t want to have “his handwriting” on the future direction of the firm. Could this be because there is jam and icing sugar all over that hand? Or because it is quite literally dipped in other pies?

The question is whether this new Michael will take just as challenging a role over his dealings with landlords as his future pa. Will he be as angry with the Administrators and Liquidators of Debenhams? Will the snacks in board meetings still be as tempting?

I guess we will see.