News Today Is Black and White - Proof of Existence 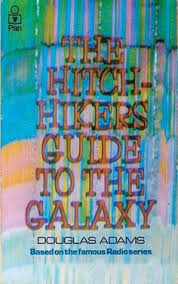 One of Neil's great heroes is the author Douglas Adams; he of 'The Hitchhikers' Guide to the Galaxy' series of books. If you have't read it, throw a sickie, buy/download/steal a copy and have a great day tomorrow.

In a memorable part of his first book he argues that God cannot exist, as Man can prove that something (a Babel fish, as it happens) is so fiendishly clever it could not have evolved and must have been created by an intelligent being, so proving the presence of God. As the central tenet of God's own argument is that he exists only by faith, proving his existence means ... "you don't. QED."

"Oh dear," says God, "I hadn't thought of that," and promptly vanishes in a puff of logic.

"Oh, that was easy," says Man, and for an encore goes on to prove that black is white and gets himself killed on the next zebra crossing.

Neil popped into the new Tower Hamlets HQ this morning, stepping over five empty pizza boxes and an ex-girlfriend of the lout from Flat 5 in the hall downstairs, and suggested a 'zebra crossing theme' for an article about today's news (a la the reference above).

"How do you mean?" asked Tracee.

"You know; bad news, good news all over the place. Black then white. Like a zebra crossing."

It is a shame, because with a bit of work and a sage and eucalyptus smoothie from out of the back door of the 'Vegan Blend - You Won't Believe It's Not Milk' not-milk bar down the road, it might have been quite a cool theme. Black news, easyJet freefell to losses of nearly £1.3 billion, conceding even as the oxygen masks dropped down from the panel above people's heads that while it has cut services by 80 per cent going into the winter, the flight plan is aimed at only reducing further expected losses. In 'normal years' its fleet of 335 Airbus 320s would carry about 100 million passengers to places not near destinations, but this year revenues have spiralled by 53 per cent to £3 billion.

Neil's idea was to follow that 'black' story with a chipper 'white' one, such as the financial markets getting an hilarious 'shot-in-the-arm' following revelations that Moderna's Covid-19 vaccine looks to be about 95 per cent effective following the latest trials. Travel, transport and leisure shares were among the best performers as the FTSE 100 index gained 1.7 per cent, or 104.90 points, to close at 6,421.29, its best close since June. Pensions are saved, yippee. We need no longer work way past death. See? Good story.

Presumably he would have followed this with a piece about the tier-system in England needing to be strengthened when we are released from captivity into blazing sunshine on 2 December, and we might not even make it to Boots for a jab with the sneaky Covid-19 virus hiding in shop doorways waiting for us and our illegal band of four friends. Pensions were suddenly doomed after all as shares in SSP, which runs food outlets at airports and railway stations, fell 6 per cent, or 23p, to 346p and was not helped by a Morgan Stanley downgrade. The budget hotels group Whitbread dipped 0.8 per cent, or 24½p to £30.29 because no-one is budgeting on a hotel stay until 2024.

But then, hoorah! A 'white' story; the private equity backer of Dr Martens ‎has picked (not kicked, because they would never have survived that, with those big boots with massive toe-caps) two Wall Street giants to spearhead a blockbuster London listing of the renowned British footwear brand. The Docs have had a brilliant year, with underlying earnings doubling in the year to March 2020, because what you most need in a pandemic are 'don't-even-think-of-messing-with-me' boots. The brand's representatives have appointed Goldman Sachs and Morgan Stanley to act as global coordinators on an initial public offering, booting down the doors of the London Stock Exchange where, frankly, no-one is hard enough.

Then, oh no, textiles firm Johnson Service (which provides workwear for companies and linen and towels for hotels) is cutting 1,550 jobs as the Coro ... blah, blah, blah crushes demand from the hospitality sector. Trading in the workwear part of the business had improved slightly in September, but slipped back in October to just 45 per cent of normal levels, with demand for hotel linen particularly badly hit as local restrictions squeezed demand and people left those little patronising cards on their unmade beds, saying they are aware that the planet is dying and with a good bang against the radiator and a shake the duvet cover could do another fortnight.

But wait - City AM reports that the effective rollout of a Coronavirus vaccine would likely inject £41 billion into London’s economy and save tens of thousands of jobs, according to new research. Under a “best case scenario”, a vaccine rollout would see office workers return to their desks for four days a week, generating all that extra cash for the good of the nation.

Upon reflection, we think that Neil's 'zebra crossing' report idea might have worked. However, Tracee was adamant and is writing a piece about undermined woman at work being crushed by autocratic bosses instead. Watch out for that.