Noah and Tesla Did It Before Time: Now the North Leads the Way in the UK 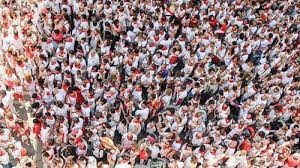 Noah did it by building an ark, despite the fact it had only just begun to drizzle, and Tesla did it by developing vehicle batteries before they built the 'Model S'. Now it appears that UK employers are doing it. Despite the fact we are still at the stage of "don't ask me, all COVID graphs look too much like a rollercoaster", British employers are hiring. The numbers are persistently up, the Bank of England are talking us through their stratgey for future interest rate growth and Goldman Sachs have said that from 7 September all employees, along with clients and visitors, will need to be doubled jabbed to enter its buildings.

So, it is time to hire and for many it is already too late. A net balance of 29 per cent of businesses told the Recruitment & Employment Confederation that they plan to expand their workforce and invest in their operations, down only four percentage points from the previous rolling quarter’s record high. This has not persuaded Neil to take on Billy and Tracee's cousin Django, mainly due to his criminal record and double cheek tatoo of a 'white walker', but it is starting to look as if he has no choice.

Neil is not alone (well, he is - very much so - but not in the sense we are describing); businesses up and down the country are struggling to fill key positions in many areas. Even with a large number of people coming off furlough in August and September, it is likely that high demand for workers will continue to cause shortages through the autumn. And it is not just truck drivers, the shortages apply to others who cannot reverse a 16-wheeler through a crack in the wall, including those (potentially) in logistics, food manufacturing and hospitality. Don't say it too loudly, but many businesses have already started the gear up to one day in December where we all learn to chorus, 'Made in China' ... and then there's Easter to consider.

The challenges are more acute in some parts of the country. Hiring intentions were strongest in the north of England, where a net balance of 30 per cent plan to increase their headcount over the coming year. It is not true to say that the bulk of those hiring are Big Issue regional managers and those carefully trained to jet-wash vomit from paving slabs.

For the south of England, excluding London, the figure was the lowest at 22 per cent; most sushi restaurants and speech therapists have already filled their vacancies.

One company the NTI newsroom think will be hiring is the EY audit department. The accounting firm has been ordered to pay £2.2 million for failings in its audit of Stagecoach for the year to the end of April 2017. Mark Harvey, the EY partner responsible for the audit, has been fined £70,000 and last year left to 'explore other opportunities'. There is one vacancy as drummer for the Rolling Stones and another as fourth in line for the throne.