Novak and Sunak: Brothers in Dilemma 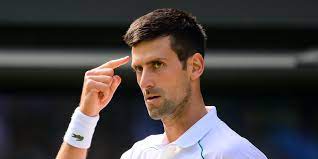 We sat around the table at the NTI newsroom late yesterday afternoon and pondered a word to use in an article to describe Novak Djokovic and his latest flight of fantasy, having flown in to Australia for the Open starting in two weeks time. It turns out the word we need hasn't yet been created.

Trust us, this story does have relevance to your Saturday morning (8 January). For those of you who may have missed the story; Djokovic, the world's No 1 tennis player, is one of the planet's most famous anti vaxxers, who refuses to tell us whether or not he has been jabbed against Covid (he hasn't). The first Grand Slam tournament is in Melbourne and, after he flew in to win it yet again, he was detained in a rather nasty hotel for migrants whilst his legal team dream up a good reason why he should slip the net he wants to play on one side of. That is, apart from being rich, famous, entitled and ... 'special'.

A hearing determining his latest fate is scheduled for Monday, but Novak has spent the time on his hands doing everything he can to endear himself to the Australian people, partly by demanding his personal chef is allowed to enter the country to cook the dust and spring water meals that are the staple of his weird diet.

The Aussies are mystified. 90 per cent of them would use a personal chef to flip their burger on the barbie ... and don't get them started on the vegan+ diet.

The reason we raise this is because Novak has the time to advise Sunak (apparently 'ak' is a family syllable going back generations, and it links the two men if not by blood, then by ideas). Rishi has a problem which is becoming ever more evident by the day, and Novak wants to help.

Unlike Djokovic, everything around Sunak at the moment is expensive; energy, transportation, local care services, life and, just like his 'ak' twin Djokovic, there appear to be no easy fixes to his immediate issues. There is a present and future cost-of-living crunch and, having just spent £400 billion on propping up the UK economy, his wiggle room to deal with it is reduced to ... well, about the same size as a room in a hotel for migrants in the Melbourne district.

Inflation is off the charts at 5 per cent at the moment, but new charts are being hurriedly drawn up, as reports in today's news say that it will rise to about 7 per cent by the spring if a cap isn't placed on energy prices which are threatening to go stratospheric. One option for Sunak is to borrow his way out of the current cash crisis, but this adds another problem of servicing the debt, given the - yes, you guessed it - debt-interest-financing challenges.

Sunak could cut VAT on energy bills, saving each household about £100 a year and costing Britain about £2 billion (yin and yang), but as energy is apparently going to cost us all about £1000 per household more this year, that is the equivalent to Novak putting dairy, gluten, sugar, salt, fat, carbohydrate mayonnaise on his maggot-infested gloop back in Australia. Is it really worth it?

What about the additional £12 billion in taxes he is going to get in following the planned national insurance contribution rises which are going to kick in in April to fund the care and social sectors? Could he scrap that, or just re-allocate it a bit? No-one it seems, even Novak Djokovic's personal nail-clipping surgeon, favours that as an option.

Apparently this rise, together with the increase in those who will be paying higher rate tax come April, will cost the average UK household an extra £600 a year this year. On top of energy increases? There will be a rebellion the size of the one the US is teetering towards if that is allowed to go ahead. Yet Rishi's erstwhile mate, Boris, is hell-bent on keeping to that particular policy.

What to do, Sunak? What would Novak do? Is there a solution to either or both of the ak-twins dilemmas? Surely there is for Djokovic - just a little prick, after all.