Pizzas and Inflation From a Different Viewpoint 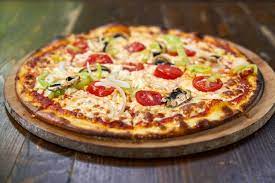 Looking at something from a different perspective is usually tough. For example, regarding a pizza from the viewpoint of the cheese, or learning to say, without clenched teeth, "you're right", even when every part of you is convinced otherwise. So, when we discovered today that 60 per cent of businesses welcome high inflation, as it gives them the opportunity to increase their prices, it runs contrary to everything we have been led to believe in this torrid year of high numbers that all appear to be facing in the wrong direction.

We asked Gareth, owner of the pub at the bottom of Neil's lane.

"The way I see it," he says, marginally adjusting the rear-facing brim of his baseball cap, "is that if carrots are 20 pence more expensive at the moment we can charge 30 pence for them and tell the punters - 'bloody prices; it's a war zone down at the wholesalers'. Clever eh?"

The monthly barometer tapped by Lloyds Bank rose by five points on the index to reach 38 per cent, significantly higher than the long-term average of 28 per cent. We in the NTI newsroom don't know what 'the index' is, but if it is now 38 when before it was 28 and an upwards rise is 'good', then that must be a positive thing. Six in ten of the 1,200 companies surveyed this month said that they planned to raise prices to protect profit margins in light of the rising cost of supplies. Only 16 per cent of businesses plan to increase workers’ pay by 4 per cent or more.

"See - that's good," said Gareth when we gave him the example.

"Not for workers it isn't, Gareth," our reporter said, looking suspiciously at his overpriced carrots.

Talking of companies, the number of them reporting plans to recruit rose for the first time in three months, with 53 per cent planning to take on staff, up from 44 per cent last month. And for those parts of the country that presumbaly cannot watch BBC news, eight of the 12 UK regions showed greater optimism about their prospects in May - up one from April.

It took NTI's old friend 'the retail sector' to return us to the perspective we have all been facing in the past four months or so. Confidence there remains low, with retail businesses reporting a below-average level of 27 per cent on 'the index'. The mythering is all about 'the erosion of disposable incomes' and 'the cost of living crisis' in that sector which has affected confidence among retailers. The place to be right now is amongst businesses that can rebuild some of their margins via price increases.