PwC Nipping Off Down to McColl for Supplies 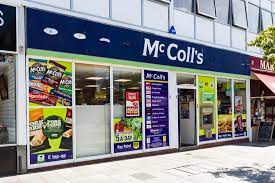 It's Friday, and at PwC they have a tradition that someone pops out to the corner shop down the road to buy lunch. Today it was a little different; someone did nip off down the road, but they came back with the corner shop. The advisory and restructuring giant, which has been advising McColl’s consortium of lenders including the Silverpoint hedge fund, is understood to be lining up to handle any Administration (plus some milk and an oven-ready pizza).

McColl's is the chain of corner stores no-one has heard of or shopped at (which may be part of the problem). It was started in 1901 by Scottish footballer, Robert Smyth McColl, who swore it would grow and last until Scotland won the World Cup. But there are limits to any prediction and time appears to have run out for the 16,000 employees after a series of rubbish results. McColl's owns more than 1,100 small shops around the UK including about 250 Morrisons Daily and was seen last night at one of its own outlets buying 14 million Euromillions tickets in a desperate bid to avoid what many think is the inevitable.

But, wait ... what is this?? The newswires are humming with an exclusive everyone has got. PwC (who have egg on their faces - and cress - from a sandwich bought at a corner shop) are weighing up an 11th-hour rescue proposal from Morrisons that would mean the convenience chain avoiding Administration. (Is 1.00pm 'the eleventh hour'? Discuss.)

Morrisons, which is the biggest supplier to McColl’s and (as we told you above - focus) has an existing joint venture running convenience stores. They made a proposal 12 minutes ago that would secure 16,000 jobs at McColl’s and roll its pensions commitments and £170 million of debt on to the supermarket’s balance sheet. Phew.

One piece of good news for landlords if this deal goes through; it would mean that they would not have a haircut on their debt at the barbers next door to McColl's who can't afford to talk to PwC about the time of day, let alone their financial future.

Of course, the Issa brothers have spotted a potential opportunity and their EG Group which also owns Asda are lining up a rival bid. Apparently Teneo are also now involved and ...

... it is all a bit much. Does anyone know a place we can pop out to and buy a Magnum to cool down?