Think of an Unsecured Creditor: Think of Clinton's 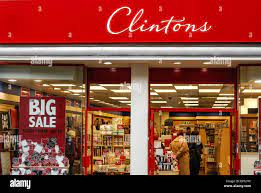 If you ever have urgent need of a stuffed frog with oversized eyes, or a 3 by 2cm bad hologram of a dolphin there is always Clinton Cards. Nothing says 'overpriced' more than a piece of folded cardboard cherishing the sentiment 'To Love Is To Belch' at a cost of £3.95.

We are tearing up in the NTI newsroom at the very thought of such tat.

But we have spared some tears for the unsecured creditors of Clinton's, who have received only £475,000 out of the £68.8 million they are owed from the sale of the greetings card chain back to its existing owners, American Greetings. The latter bought the company out of Administration via a pre-pack 13 months ago as, their main business being the manufacturer of greetings cards, they were keen to keep the stores operational.

The pre-pack deal was one of the few to grace the doors of the Pre-Pack Pool, who were so shocked to see anyone they agreed to the package in December 2018. There was a bit of a fanfare and the headlines screamed "2,500 Jobs Saved". However, Clinton has shrunk dramatically, seeing its business wilt in the face of, we don't know, things such as text messages and WhatsApp - because nothing says "Happy Birthday" more than a free message saying "Happy Birthday" ... and there is no stuffed frog necessary. Clinton Cards has shrunk the size of its business, with 308 of 335 shop sites having since surrendered, assigned or forfeited their leases to landlords.

We got all this from the progress report from our old and dear friends at KPMG (now Interpath Advisory). It reveals that Barclays, Clinton Cards’ lender, will not suffer a shortfall while unsecured creditors,including landlords and local authorities, received their first and final dividend of 0.69p in the pound.

Ouch! We hardly knew what to say to them, so sent them a piece of folded cardboard which would have cost £4.99 at Clinton's had we bought it from there. Instead we found a piece in one of our bins, wrote a nice poem on it and shoved it through their letterbox. Cost? Nothing ... but it's the folded cardboard that counts.