Thorntons: No Raspberry Delights Next Door to Principles 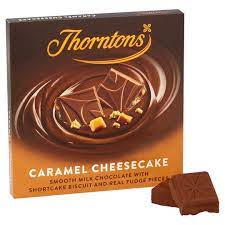 During a lunchtime discussion in the NTI newsroom, Tracee told us that her favourite Thorntons’ chocolate was the fifth one eaten, having guzzled the first four like a woman just released from prison.

There was always something a little strange about the sighting of an anomalous Thorntons’ chocolate shop, nestled between a Principles and a Carluccios when wandering around a mall in search of a phone cover or Pret a Manger. Now such journeys will be easier to navigate, as you will just need say, “Turn left at the three boarded-up stores, and don’t bother looking for the Pret, as it is now closed, being turned into five bedsits.”

It was announced last evening (Monday 15 March) that Thorntons are closing all 61 of its retail outlets, with 603 of their former people now searching for work, as it moves its business into supermarkets, other stores and online. It was probably one of the easier potential scores when playing ‘Closing Down Bingo’, as very few people would have parked their dodgy little Vauxhall on level B5 at the mall with a specific view of nipping up six escalators to buy a box of Thorntons’ chocolates. It was always going to be an impulsive bag-filler, after a couple of glasses of Sauvignon Blanc over lunch at Pizza Express.

Some media outlets are claiming that this latest closure is (yet) another ‘victim of the pandemic’, but it is probably closer to the truth to say that it is more likely a ‘victim of being a chocolate shop in expensive retail space’ only busy three days before Valentines or Mother’s’ Day’.

Adam Goddard is retail director at the store, and he told us that more than £45 million has been invested in the brand, including funding to open “new format stores” and cafés. Its factory in Alfreton, Derbyshire will remain open and there were mumblings of ‘a new beginning’ and ‘commitment to a great British brand’ behind Adam’s mask and a mouth full of raspberry delights.