What We Do Best: Needle the French 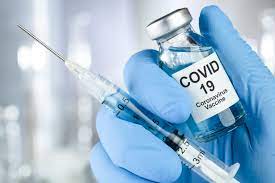 We had to hold Neil down to stop him using the metaphor 'UK financial outcome gets a shot in the arm thanks to Covid vaccinations' as the headline to this story; as clickbait goes, it doesn't really work.

"What about 'prick'bait?" Neil said. He is now in the stationery cupboard, thinking about his behaviour.

This is in response to the news that the OECD, a club of developed economies which almost revoked our membership when we ordered chips with our pâté in the club restaurant, said it expected the UK's national output to expand by 5.1 per cent in 2021, some 0.9 percentage points higher than it expected in December. Of course this means, like all economists, they haven't really got a clue, but it is a rare story that has them being wrong in our favour, so we are going to run with it.

This is because, other than battered fish and not being able to speak foreign languages, we Brits have found something that we are very, very good at. Vaccinating our people in a pandemic. To date, Tuesday 9 March, more than a third of our 68 million population has received at least their first Covid jab, compared to the French at just under ten per cent. And comparing ourselves with the French is what we like to do on the rare occasions it makes us look good. Get this; this is three times more than them. We also invented the Internet and would never wear brown shoes with a black suit.

In fact, our 'na na na na na na' moment comes in the realisation that ours is a significantly bigger upgrade than the measly (misérable, misero, miezerig, dürftig, beskjeden) 0.3 percentage point increase for Euro area economies, while both France and Italy saw their growth forecast downgraded (déclassé and declassato respectively) for this year.

The OECD also upgraded its forecast for US economic growth this year by 3.3 percentage points to 6.5 per cent (shee-it), in part due to the vaccine roll-out and in part due to the forthcoming fiscal stimulus from the new Biden administration.

But we have the last laugh, as the Paris-based OECD also upgraded the UK's growth forecast for 2022 to 4.7 per cent, stronger growth than the US or the Euro area. What on Earth will Sir Kier do with that?