Who Would Have Guessed It? Too Many Jobs Not Enough Pigs 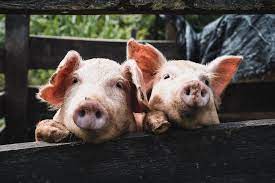 The world is a crazy and unpredictable place. Don't make out that you previously knew fertiliser plants made CO2 and that we need it to keep fish fingers cold in the back of vans and in big glass containers in supermarkets: and don't pretend you had heard of Goto Energy, People's Energy and Avro Energy and expected they would be in trouble as it isn't windy enough in Great Britain to turn a turbine. There are way too many things to be worried about, but at least we now know two of the things we should concern ourselves with as we move away from Donald and Brexit and Covid.

It also turns out that the problem with unemployment, one of the things that has historically kept teenagers awake in the small hours, isn't that there is too much of it, but that there are too few people hunting the hundreds of thousands of jobs that are begging to be filled. But that has to be great news, right? You'd think; but the sum of it is that the number of UK sectors reporting output growth fell to a six-month low in August, as the impact of labour shortages intensified.

We have told you before at the NTI newsroom (and don't make us come up there with a big stick ...); on the niftily-named Lloyds Bank UK Recovery Tracker a reading above 50 signals output is rising, while a reading below 50 indicates contraction. So, you will understand when we report that UK transport businesses last month fell to a reading of 42.9, with chemicals dropping to 45.0 and metals and mining manufacturers down to 47.9 for the first time in six months, this isn't a good thing. What is this down to? Labour shortages and supply-chain disruption; to which we can now add a shortage of CO2 and lack of energy.

There are what are delicately termed 'recruitment challenges' in a number of industries across our fine and still sunny land. Are people being too choosy? Lazy? Underqualified? Well, yes, yes and damn yes; but this has all crept up on us when we thought we wouldn't be able to afford Christmas this year. Even Tracee is being forced to be aware of the world around her. She told us this morning that she had seen an item on TV news last evening which reported that 200 pigs may have to be culled on a farm and placed into landfill as the CO2 normally used to stun them as an essential part of the ham-making process isn't available. She immediately went out, adopted one, has named him 'Porker' and when she called to him twice in the office today Neil turned around, thinking he was being summoned.

It all makes complete sense in a well-ordered world. Too little fresh meat on the shelves, so go out and murder 200 pigs and shift them to a shallow grave as we haven't got the air to freeze them. In the alternative, pay more money towards the Indian space programme, not towards funding the two fertiliser factories which could then get CO2 production back on the grid and solve the fish-finger problem

In other parts of the economy the numbers are heading in the other direction. It was reported today (Tuesday 21 September) that public sector net borrowing was £20.5 billion in August, £5.5 billion less than in the same month last year. To put this in perspective; the amount we are not spending in one month is a third of the amount we need to raise over ten years to finance the changes to the care sector ... which we cannot afford without putting up National Insurance to unattractive levels.

The Bank of England has signalled that some tightening of monetary policy may be necessary to keep inflation under control. But we have a different solution; save the pigs from being culled and put them in charge for a while. It couldn't hurt.