As You Read This They Are Watching You ... 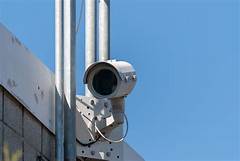 The irony was not lost on Billy as he did a little (watched and noted) research for this article. He accessed a Government website about suveillance and CCTV cameras in the UK and was greeted by a notice that started, 'We value your privacy ..." and then went on to request he agree to something. And Billy will agree to anything in exchange for a Hob Nob and a chilled bottle of Desperado.

It turns out that on the list of the world's most-watched countries ranked by the number of CCTV cameras, the UK comes in at number four, after China, USA, and Germany. Of the 5.2 million cameras recording our best sides (one for every 13 people) approximately 691,000 CCTV cameras are located in London, a further 83,000 are in operation in Birmingham, 58,000 in Leeds, and 46,000 in Glasgow. There is one in the village of Nether Wallop trained on the bathroom window of Chardonnay Sinclair, but that has absolutely nothing whatsoever to do with the Government.

In a Home Office paper from 2013 entitled Advances in Surveillance Equipment (which have continued five-fold since that time) it was said that such equipment increases the ability and capacity to capture, store, share and analyse images and information. This technology can be a valuable tool in the management of public safety and security, in the protection of people and property, in the prevention and investigation of crime, and in bringing crimes to justice. Well, that's good.

Now we hear that, as well as Tesco, HMRC are well onto us. The growing power of digital communications and computing, combined with new regulatory powers, enables the tax authority to go further, deeper and faster in trawling for mind-boggling amounts of financial information.

[They almost certainly know you are reading this article ... and are not best pleased.]

Most things we do leave a digital fingerprint and this finds its way into the Revenue's hands. You probably read that the UK has become one of the first countries to begin implementing international rules agreed at the OECD, the rich states’ grouping, requiring digital marketplaces such as Amazon, Airbnb and eBay to share financial details of people selling on their sites with tax authorities. So HMRC will know that you sent for that dog bath from a Chinese website and it turned up the size of a hat.

From April 2023 landlords and the self-employed with property or business income of more than £10,000 a year will be drawn into HMRC's web and made to keep digital records and report their income every quarter. On the plus side all of this digital information should make dealing with HMRC easier, as tax reporting processes are made more automatic. On the downside it could also increase tax officials’ scrutiny of our lives, resulting in potential leading questions about that Danish website you enjoy after the Ten O'Clock News and the stash of 25 litres of lawn feed you have in your shed.

HMRC says: “Better use of data will help us deliver a digital tax system, which is easier to use, harder to evade or avoid, and builds trust by being fairer.”

Gary from Bury signs at you through a cafe window, asking you to meet him behind a disused railway shed and passes you a tenner in change (which HMRC will charge £2.78 tax on ... because they know).