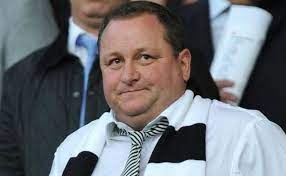 There are four idiots at the top of the news today (Tuesday 15 February). Two are dominating the "will he, won't he?" question polls, one has settled the "did he, didn't he?" this afternoon and the fourth ... is Mike Ashley (welcome back, Mike. Is it us, or are there even more chins than ever?).

As the world holds its breath, it could be we are closer to the answer many people have craned their necks to find out. Will he? It seems he won't. Novak Djokovic has finally admitted what we all knew (like a person slowly peeling a Santa costume off to reveal the man beneath); he hasn't been vaccinated against Covid-19 and doesn't mind not adding to his current tally of 20 Grand Slam tennis titles, because everything is about his body and what he chooses to put into it. We think this means he won't be lying to any more border authorities about his health status. Phew.

It's important you understand the phrase 'put into it' in relation to Mr Djokovic's body, as opposed to 'put it about', as there have been unsubstantiated rumours of the latter in the past regarding his ... 'friendships' with Serbian pop stars, such as Natasa Bekvalac, an ex-girlfriend DJ Lady Lee and a certain Deepika Padukone. None of these went beyond allegations and we in the NTI newsroom are only providing a previously published list for Novak to dispute, we are certainly not suggesting ...

It is just curious, isn't it, what a person will choose to hold strong values about?

Talking of strong values and a puffed out chest, Vladimir Putin, it seems, may have made his point and now be withdrawing some of his troops from around the Ukraine border. Other reports suggest no such movements and yet others have said, "it's just a little prick, why doesn't he just get on with it?", but they are one news story behind.

The BBC have some breaking news this afternoon, reporting that the Duke of York has settled a civil sexual assault case brought against him in the States by Virginia Giuffre. Surely the Beeb have jumped the gun here? The Duke has strongly denied ever even knowing Ms Giuffre in the past and there were reports all over the media this morning that he was further denying 'that photo' of him lolling his royal unsweaty arm around the girl was real. Maybe that ridiculous 'cat got the cream grin' he appears to be wearing in the allegedly fake photo was also photo-shot onto his face as well. Maybe we will never know.

What we do know is that Mike Ashley has made it a hat-trick in the last week. Studio Retail, a company in which Ashley has a 28.9 per cent stake, has hurtled towards oblivion in just days, after HSBC withdrew their financial support. Adding this to Debenhams and Goals Soccer Centres, which went bust in 2019 after an accounting fraud, that's three in three for the portly billionaire who could be losing his touch, as well as his looks.

Ashley's Frasers Group may yet spring to the rescue and bankroll Studio Retail out of their recently acquired financial malaise, but it will mean them acting as bankers to a business which isn't that good (the evidence suggests) at retail. Is this a good time for Frasers to be spreading their alleged expertise?

All this on a day when it was announced that UK inflation outpaced wage growth at the end of 2021. The Office for National Statistics said this morning that average weekly earnings, excluding bonuses, grew at an annual pace of 3.7 per cent in the final quarter of 2021. Inflation is simply ... higher than that. In real terms we are all 0.8 per cent worse off and those of you still peddling carbon-fuelled vehicles will know this as you stare goggle-eyed at the price of petrol and diesel in forecourts all over Britain and shout at anyone who wil listen, "HOW much?"

But, story of the day undoubtedly belongs to 15 year old interntional ice-skater Kamila Valieva, not (you understand) representing Russia in the Winter Olympics, as they are both banned from being there and too busy nonchalantly retreating from unwarlike positions around Ukrane sovereign territory. She is representing the 'Russian Olympic Committee', which is different, as it has more letters.

Kamila has failed a drug test, but there is a good and wholly believable reason for the poor mite having done so. It seems she shared a glass with her grandfather over Christmas. He is on medication and some minute particles of that medication must have dripped into the glass from his mouth (are you having your tea?) and been transferred to that of his granddaughter. Now that seems plausible ... it should certainly fool the Olympic Committee.

So, this evening's competition is: spot the biggest liar and vagabond. A clean glass of grandfather's medication for the winner.