Never a Better Time Not to be a Landlord - Part 17 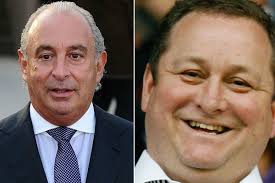 Not since Giant Haystacks and Big Daddy blubbered it out in the wrestling ring in the 70s was so much sweat, grunting and disgust packed into the same area for people to turn away from, frightened for their sight. However, news today (Thursday 30 June) was all about Mysale, an Aim-listed online Australian nobody, being courted and flirted with by Sir Philip Green (wearing size 3 children's Gucci loafers, in one corner) and Mike Ashley, holding two loafs, barely fitting into the other.

The question everyone was asking is, 'Why?'

Until a Brexit, two Covids and a cost-of-living crisis (otherwise known as 'fairly recently') these two heavyweights were frequenting the same London clubs and photographed together with matching red faces. In 2019 the pair fell out over HMV's Administration and much has been made of the great battlegrounds of Debenhams and Top Shop which has seen them gnash teeth and try to buy each other's companies for ludicrously small amounts.

Someone in bad clothing from Frasers stood outside the stock exchange in London this morning at 7.00 waiting for it to open in order to proudly announce it had acquired a 28.7 per cent stake in Mysale; never mind tell the company itself. Previously Philip Green had been the major stakeholder of Mysale with a 16 per cent stake. This has the beginnings of a mini-series for the NTI newsroom - frankly, we can't wait.

Meanwhile, it is another very good day not to be a commercial landlord. Some of the UK's grandest property owners felt the hit on Wednesday, after someone apparently worth listening to across the Pond said that the glory days of office developments were over. Shares in Land Securities, Workspace and Great Portland Estates all fell by more than 5 per cent and British Land, which analysts at the Bank of America earmarked for a potential dividend cut, was the worst hit as it dropped by almost 9 per cent. We are just hitting the 'equals' sign now to tot up the paper losses in a single day: wow, £1.4 billion. That is a lot.

People in pinstripe suits at Bank of America have been looking around at half full office buildings and taking the temperature of the surrounding waters and have announced a “perfect storm” of factors weighing on the outlook for the commercial property sector. It has cut its earnings forecasts for office landlords by 7 per cent a year for the next ten years.

Despite a post-pandemic rebound in office rents the US investment bank predicted that rental growth will slow to a halt by the year 2024 (far enough away for people to have forgotten they forecast this, if they turn out to be wrong). The end of cheap money appears to be over (or just resting) and rising interest rates have served to push up yields on government bonds to ten-year highs. There are now alternatives for investors who did not fall for the recent Amazon/Bezos crypto-currency scam and who have money they can invest ...

... anywhere other than commercial property.