Previously From The NTI Newsroom 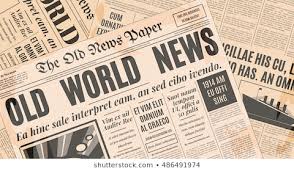 There was 'news', but not particularly news, today about some of the old friends we have made since compiling this 'Must See Guide for Those in Our Glorious Profession'. It is not especially 'new' and not at all 'news', but it seems fit to fill you in, like that rubbish postface at the end of a bad novel: such as, 'Four Years Later: Despite pursuing Caroline across three continents and having lost his left arm, Kevin and she never married. He killed himself two years later.'

The only word that became more wearying than Covid in 2020 was 'Debenhams' and today (Thursday 14 January) we learnt that the department store chain has confirmed plans to close six stores permanently, including its London flagship store on Oxford Street. The move will affect 320 members of staff and will bring Debenhams’ store estate down to 118, compared to the 124 it had before it began Liquidation proceedings in December.

Don't blame FRP for this; for them it is like being stuck babysitting nine year old conjoined twins with ADHD. It must have felt like a good job to begin with, but ... really? For the record FRP are continuing to engage "with a number of third parties regarding the sale of all or parts of the business".

Engage away, but do so a little more quietly.

If you want to add a little more flesh to the Debenhams skeleton, other than the 370,000 sq ft flagship on London's deserted Oxford Street, the other branches you shouldn't consider looting are in Portsmouth, Staines, Harrogate, Weymouth and Worcester. Poor old Geoff Rowley, advisory partner at FRP; he was forced to play a recorded message of: "We regret the impact ... our hearts go out to ... hard working members of staff ... I'm running low on battery ... please plug me in."

In other news, we did a jaunty little piece about the advanced knackeredness of Croydon Council in the summer of last year, and how it was impossible to imagine a Council going formally broke. Well, twice in the past two months, the Labour-run council in Croydon (and we think political affiliations are critical here), on London’s southern fringes, has issued a section 114 Notice (of the Local Government Finance Act 1988) after failing to fulfil a legal duty to balance its books. It follows Northamptonshire who did the same in 2018, but it will not be the last to do so.

For the legal at heart a section 114 Notice means that no new expenditure is permitted, with the exception of that funding statutory services, including safeguarding vulnerable people, however existing commitments and contracts will continue to be honoured. Council officers must therefore carry out their duties in line with contractual obligationsand to acceptable standards, while being aware of the financial situation. Any spending that is not essential or which can be postponed should not take place and essential spend will be monitored.

The Council absolutely cannot set up and run crisis centres for people called Adrian who identify as a hairbrush, and who want to share with like-minded others.

We could give you more detail, but you get it. Croydon Council are in a desperate situation and everyone is blaming everyone else.